Literary Contests and Services to Avoid 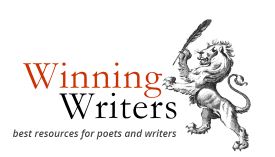 Contests and Services to Avoid

We suggest you avoid the following contests and organizations. Many appear to be disguised vanity publishers, whose goal is to sell you expensive personalized products and attract you to conferences. Others may charge you membership or service fees for which the benefits are questionable, or which can be obtained elsewhere for free. Still others claim the right to publish your entry whether or not you win a prize. Winning prizes from these organizations will add little to your resume, and may even make you look amateurish to publishers and other poets.

The most common pitch is to make poets buy their anthologies as a condition of publication. Publishers in this category include: Famous Poets Society, Sparrowgrass Poetry Forum, The Amherst Society, The Poets’ Guild, Poetry Press, Poetry Unlimited, The National Archives, and JMW Publishing. Others try to sell you services, such as manuscript editing or agency representation.

Vanity contests are characterized by low standards, and are willing to publish most of the submissions they receive (typically half or more). They primarily market their publications to the contestants themselves, often at high prices. Few copies are sold to independent buyers or libraries. A vanity contest is not necessarily a “scam”. It may disclose its terms and selection procedures fully and accurately. Nevertheless, all of the contests above are a waste of your time. There are plenty of better ones to submit to, selective contests that want to promote good work to a wider audience.

Some of the contests that target schools, such as Polar Expressions Publishing, Young Writers of Canada, and Creative Communication/Poetic Power, make us uncomfortable. These contests exercise a modest degree of selectivity, accepting 25-80% of entries. While this is better than publishing virtually all entries, we prefer more rigorous contests that reserve praise and publicity for truly outstanding work. We’re concerned that excessive praise for average work may confuse writers about the meaning of excellence and weaken their drive to improve.

Watch out for online critique forums and social networking sites that offer what appear to be free contests, but make unreasonable claims to your intellectual property rights in the fine print. Some online contests require you to post an entire book-length manuscript for reader votes; this may prevent you from shopping the manuscript elsewhere if it does not win the contest, because it would already be considered “published”. Other contests assert the right to publish all entries without notice or compensation, which is not a good deal for writers and not a normal practice among reputable contests.

The Poets Literary Agency – Avoid
We feel this site is a bad deal for poets because it misrepresents how the poetry publishing market works. Reputable publishing houses use contests and open submission periods to find new poets. The use of agents is very rare. The trade shows and mass mailings that Poets Literary Agency mentions may be valuable for commercial nonfiction, but are not a normal publicity channel for poetry. Moreover, their critique fee (reported to be $74 as of October 2006) is suspiciously high, especially when it’s not obvious that the staff has any literary (as opposed to marketing) credentials.

High-Priced Book Promotion Services
Poets and other small press authors should be on the lookout for marketing schemes that charge high fees for book publicity services of dubious value. Winning Writers newsletter editor Jendi Reiter, author of the poetry collection A Talent for Sadness (Turning Point Books, 2003), recently received a mass-mailed sales pitch from Airleaf Publishing & Book Selling. Headed “A National Campaign for A Talent for Sadness!”, the letter purported to be a “special invitation” to participate in a national publicity campaign, including television commercials, full-color glossy newspaper inserts, interviews on local radio shows, and telemarketing calls encouraging bookstores to stock her book. All for the rock-bottom price of…$6,996.

While overpriced publicity services are nothing new, we felt this personalized letter crossed an ethical line by creating a false appearance of selectivity. “We recently discovered A Talent for Sadness and we believe it has the potential to be a national bestseller. Your book comes highly recommended and is precisely the kind of book we have had the most success selling.” Well, gee. We’d like to think so, but poetry books that aren’t written by pop stars or ex-presidents rarely achieve that level of commercial success. The total mismatch between these extravagant promises and the type of book being promoted makes us very suspicious of Airleaf’s claim that “we have invited a very select group of authors and are accepting just the first 25.” More likely they generated a letter like this for everyone on their mailing list who had a book out.

Even leaving aside the dishonesty, we feel services like these are generally not a good investment. It’s better to do your own targeted research on the bookstores, local radio and TV stations, and performance spaces that would be most appropriate for promoting your book, instead of wasting money on a mass-mailing to markets that aren’t appropriate for you. For far less money than Airleaf is charging, you can hire an assistant to help you schedule readings and network with booksellers, if you don’t have time to do everything yourself. Pick up a copy of Carolyn Howard-Johnson’s The Frugal Book Promoter for some creative ideas.

Franklin Publishing: Unfavorable Terms
In July 2007, a subscriber queried us about whether Franklin Publishing, an independent (and apparently for-profit) publisher of social science and business journals, was a scam. We found their website to be up-front about the terms of publication and the fees charged to authors, but we would still advise authors to avoid this publisher.

Franklin’s website states: “Review copies are not available. Authors receive a 15% discount on single issue and annual subscriptions. Author’s copies are not available. Authors retain ownership of all manuscripts and therefore no contracts are signed with authors. We do not provide free copies of books, journals, or articles printed in journals or books. Authors are paid for their manuscripts by receiving a 15% discount on books or journals that they purchase.” Their journals typically cost $600 for an annual subscription or $60 per issue.

Reputable academic and trade publishers provide a certain number of contributors’ copies and reprints at no charge. We refrain from calling Franklin a scam because we have no way to assess how selective their “peer review” process is, but it appears to be primarily a vanity press to generate publication credits, and probably carries little prestige as compared to legitimate academic journals.

Zimbo Books
We received a promotional email from this company in October 2008 for the Zimbo Books Fiction Competition 2008:

Zimbo Books is pleased to announce the Zimbo Books Fiction Competition 2008 commemorating the launch of Zimbo Books. This exciting competition as described in the competition rules has 2 major benefits:
* A prize pool of USD $100,000 with a first prize of USD $80,000.
The next four runners up get USD $5,000 each.
* One year’s subscription for all Authors to sell their books online via Zimbo Books (value USD $45).
The closing date of Registrations for the Competition is 21 April 2009. Registration fee is USD $85 per entry. Authors can enter more than one book.

Such big dollar amounts for a literary contest should be the first tip-off that something is amiss. Add in the fact that the entry fee is unusually high, and the sponsor has no literary track record, and this starts to look like a contest to avoid, even if no deception is involved. I was also concerned that the sponsor never responded to my email asking for more details about the rules.

We asked our Australian affiliate, John H. Reid, for feedback on this Australia-based publisher and their contest terms. John observed that even if it’s a genuine contest, “it has a 99.9% chance of failure. This type of PDF marketing has been tried before and has failed every time.

“Lulu and quite a few other USA publishers have a PDF or download marketing division, but it’s mostly window dressing. Only one in a thousand sales are PDF downloads. And once bitten, twice shy. A reader who does this once is unlikely to return. The disadvantages are too great.

“And the whole idea of a contest with a whopping big prize and a whopping big entry fee has been tried before many times. All have failed dismally. At $85 they would be extremely lucky to get 100 entries. But even if they received 1,000 they are still in the red.”

John also found this suspicious clause buried in their multi-page rules: “In the event an insufficient number of entries are received, Zimbo Books reserves the right to cancel the Competition and shall be under no obligation to award the prizes, but will refund $40 of the [$85] Registration Fee to the author’s Zimbo account.” Thus, the whole enterprise could well be a scam to generate nonrefundable entry fees.

The lessons: Read the fine print, and if a prize seems too big to be real, it probably is.

Character Building Counts Book Awards
The name and URL of the “CBC Book Awards” appear designed to create confusion between this contest and the much more reputable and prestigious CBC Literary Awards from the Canadian Broadcasting Corporation. The Character Building Counts Book Awards charge an above-average entry fee of $85, with no cash prize. Instead, winners are promised such nebulous benefits as “potential increased sales and income” and a “professional press release sent to thousands of TV, radio, and print media outlets”. Moreover, the site contains no information about the judges or the sponsoring organization, and the link to past winners does not work. For a contest that supposedly rewards books with “character-building messages”, the organizers are curiously lacking in transparency.